The Congregation of Carmelites of Divine Mercy, the new millennium Congregation was founded by Rev. Fr. Bernardine M Louis OCD, native of Trivandrum, Kerala, India on 16th of July 2010.Fr. Bernadine was born of Late Mr. Peter Louis and Mrs. Regina Louis on 31st December 1937 as the fourth child of the five member family. The devoted parents spent their entire life for the overall establishment, development of Our Lady of Fatima Church, in their home front at Adimalathura. As a high school student Fr. Bernadine had the opportunity to welcome Most.Rev.Dr. Vincent Dierere OCD the Bishop Trivandrum during the pastoral visit and whose speech contained “who shall go for me...’ and the encounter with the Bishop was the turning point of his vocation to Priesthood on May 20th 1955 .During the life in Pontiphical Seminary Alwaye, Rev.Fr. Andrew Fernandez OCD, the spiritual father, who later became his lifelong spiritual guide who opened the door to the vocation to Carmel as well as stood by him to attain the long cherished desire of establishing the Congregation as on now. Fr. Bernadine Maria Louis of St Antony of Padua made his First Profession on 14th June 1961 and the Solemn Profession on 14th June 1964 respectively at Carmelite Monastery, Manjumel and was ordained priest on March 14, 1965 at Pontifical Seminary at Alwaye.

As a young zealous priest Fr. Bernadine was appointed to teach Latin and English to the Aspirants. Later on Fr. Bernardine was sent to take Licentiate in Theology at Pontifical Athenaeum in Pune and for the Bachelor Degree. Immediately after the completion of studies Fr. Bernardine was sent to Andhra Pradesh on November 18th 1971 as one of the pioneer missionary .As Carmelite vocation it is an invitation to be a contemplative as well as to lead an evangelical life ,Fr. Bernadine began his services as parish priest in Kothagudem which is now turned as the mother house of the present Andhra Province today.Fr. Bernadine as Carmelite missionary travelled to villages far and wide propagated the kingdom of God and baptized many to Christianity. Knowing their deplorable condition in terms of health, hygiene and education Fr. Bernardine had a long term vision about them and same has been updated to major superiors ,family, friends, benefactors and competent local govt. authorities, who in turn offered father Bernadine all supports and even free land to establish a health centre for lepers (Karunambika Leper colony)and technical education for boys now known as the Mount Carmel Boys Town ( ITI).In order to accelerate the services among the poor, Fr. Bernardine established several foundations by bringing various congregations who cooperated with his charisma and the Carmelite spirit. Fr. Bernadine gratefully remembers the unconditional support received from Very Rev.Fr. Philip Sainz de Baranda OCD the Superior General, Rome. The services rendered by Fr. Bernardine, as a Carmelite missionary is in the land mark history of the Discalced Carmelite Province of Andhra Pradesh, where local people call him” PEDDA FADHARGARU” which means big father.

The life and living situation of the people at the coast of Kerala and Tamilnadu were very much in the mind of the person Fr. Bernardine. While Fr. Bernardine was doing his studies in missiology at the Institute of Lummen Vita of Louvain university in Belgium, he had ample time to reflect, meditate over issues and miseries of the people.. Meanwhile the provincial chapter of Majumel province in the year 1986 whose motto was preferential option for the poor’ gave way to establish Bethsaida in December 14, 1989.Founding Bethsaida was necessary because people were unsecured, uneducated, underdeveloped and exploited. Fr. Bernardine as a rank holder in Bachelor in Education from the University of Mysore realized that educating the community is the only way to development, to eradicate poverty Fr. Bernardine established Job oriented training centres, and also community college to nourish them spiritually and mentally. Today Fr. Bernardine has prepared a platform for learning to more than 1750 children, in three schools, Carmelrani Training Centre for technical education, centre for graduation and professionalism for adults, day care centre for elderly people, and village animation programme. Very Rev.Fr. Camilo Maccise OCD, Superior General, Rome exclaimed by seeing the manifold activities of Fr. Bernardine and said “you do the work of Order and bring to every poor person”. When Fr. Bernardine became the provincial of South Kerala province in the year 2002 he established a long term goal of twenty years in view of realizing the North East Mission of South Kerala province as an autonomous, independent province by taking radical steps. In 2003 Fr. Bernardine initiated the steps to bring OCD Nuns to the Diocese of Trivandrum. In the year 2004 Fr. Bernardine constructed new Provincial House for the South Kerala Province at Kottiyam,Kollam .In March 2005 Divine Mercy Centre an institute of spirituality was established to educate and spared the mercy of God. In 2006 very Rev.Fr. Luis Aristegui Gamboa OCD superior General Rome, made clear distinction of the social activities of Fr. Bernardine free of the St.Peter’s Monastery and the South Kerala Province and advised to include three fathers in to the society where in father Bernadine is the president. Rev.Fr. Agustine Stanly OCD, the nephew of Rev.Fr. Andrew Fernandez OCD was always there at the beck and call of the activities of the society and remained as the collaborator of the works for the poor. The society members whole heartedly appreciated the request of Fr. General and the Definitor General Very Rev.Fr. Xavier Jayaraj OCD. 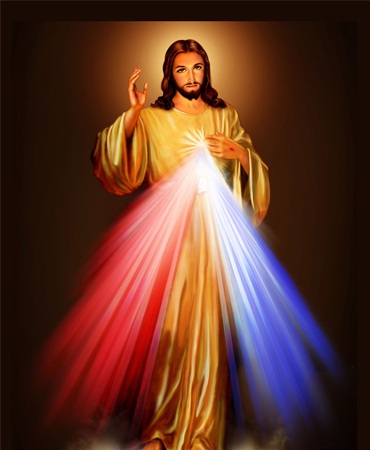 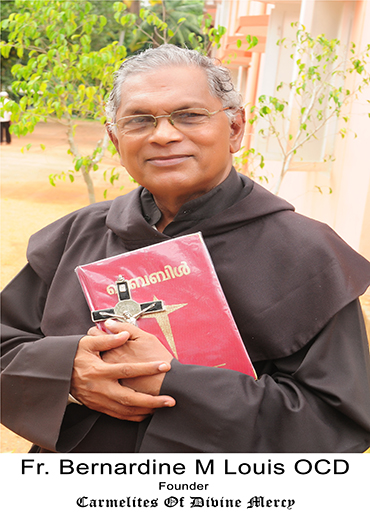 The Carmelite order having discerned the ambiguity of the works carried out by father Bernadine and the charitable society represented by him, whole heartedly encouraged and appreciated at all times. Hence it was of paramount importance to establish the Congregation of Carmelites of Divine mercy which took 25 years of prayers and waiting. Very Rev.Fr. Saverio Cannistra OCD Superior General, Rome gave permission to Fr. Bernardine to form a congregation according to his charism and gave letter of recommendation to Most.Rev.Dr. Soosa Pakiam, Arch Bishop of Trivandrum, and to Rev.Fr. Antony Mathias OCD Provincial of South Kerala Province. Father General appointed Rev.Fr. Gregory D’souza OCD as the delegate of Fr. General and Rev. Fr. Datius Kanjiramukill OCD and Rev. Fr. Geroge Ollattupuram OCD as consultators. Fr. Bernardine is grateful for the support of Father General, which he receives through the Person of Rev.Fr. Agustine Mulloor OCD, the Definitor General Rome. The bishop gave his sanction for the congregation on the feast day of Divine Mercy, in April 11,2010. It took a long way between to find the congregation that shall assist Fr. Bernardine for the formation of the candidates. The personal relation Fr. Bernardine had with Rev. Sr. Mary Violet CCR who knew Fr. Bernardine,his aposalate also had always a wish to serve the poor, guided father Bernadine ,to approach Mother General Mary Frances CCR of the Apostolic Carmel Trivandrum now known as “The Carmelite Religious( CCR), who later happily accepted to associate and collaborate with the vision and growth of the infant congregation. Rev. Mother Mary Elma CCR, rendered the services of very experienced sisters of the congregation including Rev.Sr. Mary Violet CCR and Rev. Mary Evangelist CCR respectively who are the pioneer formators of the congregation. Later on Rev. Sr. Helen Louis CCR and Sr. Mary Lucia CCR were send by Very Rev. Sr. Mary M.M Provincial. The congregation of Carmelites of Divine Mercy was inaugurated in the presence of Rt. Rev. Dr. Ponnumuthan, Bishop of Punalur, Rt. Rev. Dr. Iraneus Kattukallil, Auxillary Bishop of Trivandrum (Malankara) ,Rev. Fr. Gregory D Souza OCD, Delegate General, Rev. Mother Mary Elma CCR, Superior General, Consultators, Provincials, Reverend Sisters ,Fathers and people of God by His Grace Most. Rev. Dr. Soosa Pakiam Arch Bishop of Trivandrum Latin Diocese on 16th July 2010.

At present the Congregation has two foundations, Called Visitation and Presentation. The Carmelites of Divine Mercy, Visitation Foundation is headed by Rev. Sr. Helen Louis CCR, Rev.Sr. Mary Violet CCR and CCR. The Carmelites of Divine Mercy, Presentation foundation is headed by Rev. Sr. Elizabeth Joseph CCR. And our new house Resurrection headed by Rev.Sr.Mary SimonaCCR. At present we have 5 Aspirants, 4 postulants,5 Novices and 10 simple professed sisters. The infant congregation with its charism and vision of Fr. Bernardine moves forward towards global expansion, in trusting God’s mercy and providence. And Fr.Bernardine adds, he will persist until he succeeds singing the mercies of the Lord-”Misericordias Domini in eternum cantabo!!’’

To strive constantly to live in intimacy with God

Aid to the aged and abanconed

Protection and service to the elderly